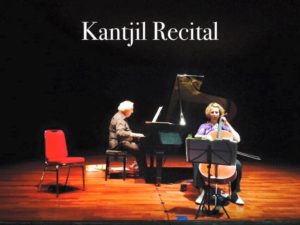 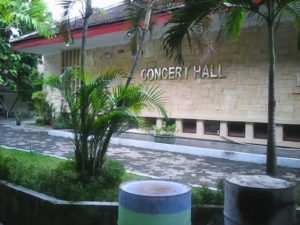 Concert Hall of Pascasarjana/ISI, the main venue in Yogyakarta 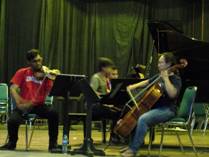 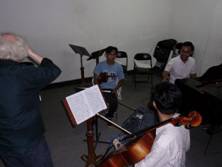 This “double-project” was materialized by: 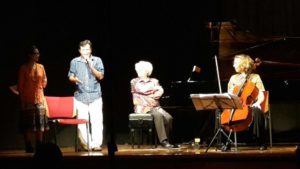 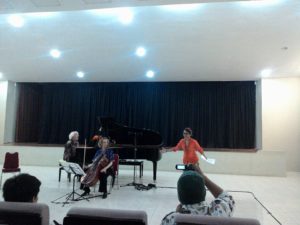 As mentioned before, in fact two chapters materialized:
1. The Kantjil Recital program and
2. The YICMF and the attached educational program.
Both chapters were set up by the initiators: Asep Hidayat, Gatot Danar Sulistiyanto,
Doris Hochscheid, Frans van Ruth and PH,
being strongly supported by ISI-Yogyakarta (academy of arts).
Obviously a variety of elements was implemented serving the main goals:
a. Intercultural cooperation between Dutch and Indonesians performers & composers;
b. Enhancing performances of chamber music in a broader sense;
c. Extensive Educational Program, making use of the expertise available
(by Doris Hochscheid, Frans van Ruth and I Gusti Bagus Wismakarma)
focusing on the specific needs and requests at ISI-Yogyakarta.
The Kantjil Recital program consisted of four concerts:
25. April 2015 – Erasmus Huis–Jakarta;
27. April 2015 – International Brain Academy – Semarang
(in cooperation with Widya Mitra, the Dutch-Indonesian center for language and culture);
29. April 2015 – Cak Duarasim – Surabaya
(in cooperation with Pertemuan Musik Surabaya);
2. May 2015 – Concert Hall of Pascasarjana/ISI- Yogyakarta
(in cooperation with YICMF and AMT).
The program been performed during these Kantjil Recitals was as follows:
Two new compositions written for this occasion by Indonesian composers:
Gatot Danar Sulistiyanto (Yogyakarta) commissioned by Eduard van Beinum Foundation,
and Iwan Gunawan (Bandung), commissioned by StichtingCellosonate Nederland.
Paraphrase on Il Trovatore by Verdi, composed by the Dutch composer
Alexander Batta (1816 – 1902)(intermission)
A Kantjil story (newly created for this occasion),
combined with six short compositions by Dutch composers
(from the three Albums for violoncello and piano,
written for amateur musicians and initiated by
Doris Hochscheid and Frans van Ruth, published by Donemus).
The composers of the compositions that were performed:
Sinta Wullur, Roderik de Man, Claudia Rumondor,
Guus Janssen, Joey Roukens and Mathias Kadar.
The text of the Kantjil story was translated and arranged by Gema Swaratyagita,
who also did the narration and the presentation of the concerts.
Before the first concert we had the chance to arrange a rehearsal session
with both Iwan Gunawan and Gatot Danar Sulistiyanto
on 24. April 2015 in Erasmus Huis.
This way the performers and composers had the opportunity to work intensively together.
It also enabled GemaSwaratyagita, Doris Hochscheid and Frans van Ruth
to work out the Kantjil Story.
More information about the Kantjil Recital Project to be found in the program book: in English

The YICMF took place at the Concert Hall of Pascasarjana/ISI – Yogyakarta,
and was organized as the main cultural event within the framework of
the Dies Natalis of ISI-Yogyakarta.
Specifically the department of Performing Music of the newly founded
Faculty of Music of ISI-Yogyakarta was the most important partner in this event
as well as in the attached educational program.
Two concerts were set up: 9. And 10. May 2015.
The program that was performed was centered around three curators
of the educational program:
Doris Hochscheid (Violoncello), Frans van Ruth(Piano)
and I Gusti Bagus Wismakarma (Violin),
completed by Asep Hidayat, Grangi Guitar Duo
and the most excellent participating ensembles from the educational program:
Picellin piano trio and the Sewon String Quartet.
Detailed information can be found in the attached program book of YICMF. 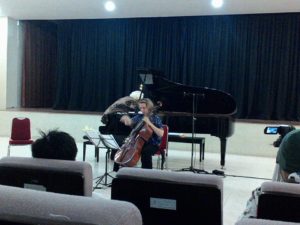 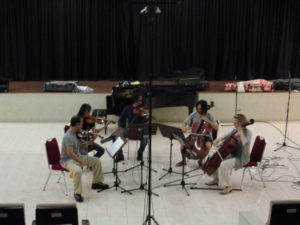 During the Educational Program attached to YICMF, there were
three categories of ensembles consisting of students of ISI-Yogyakarta:
1. Three ensembles selected during a mini competition (January 2015);
2. Three ensembles set up by Asep Hidayat, Gatot Danar Sulistiyanto and PH
(also established in January 2015);
3. Cellissimo (12 violoncello students of Asep Hidayat)
who got the chance to work on
new arrangements and a new composition by Roderik de Man.
The Educational Program was materialized 4. – 8. May 2015,
and finalized with a concert (8. May 2015 in the “Auditorium Musik”
of the Faculty of Music/ISI-Yogyakarta),
a presentation of the results of all master classes
conducted by the three curators:
Doris Hochscheid, Frans van Ruth, I Bagus Wiswakarma.
Asep Hidayat took care about Cellissimo.
The Educational Program started with a general introduction by the curators and producers:
Asep Hidayat, Gatot Danar Sulistiyanto and PH.
After that Doris Hochscheid and Frans van Ruth gave a lecture recital explaining
the new compositions by Iwan Gunawan and Gatot Danar Sulistiyanto.
During the Educational Program Gatot Danar Sulistiyanto assited Frans van Ruth.
GemaSwaratyagita assisted Doris Hochscheid.
Apart from the planned educational program Doris Hochscheid and Frans van Ruth
offered master classes and individual coaching to a number of students on request.
More information about the final presentation of
the educational programme: YICMF-Edu-program

Obviously the preparations and set up of this “double-project”, working out all the details on a distance of over 10.000 Km and hardly any chance of meeting all initiators at one place before the project started, this had to have consequences for organizing and producing.
For these reasons all participating organizations decided to ask TRACE21
to make PH available as the executive producer.
That is also the reason he was made responsible to report on this project.
Of course he fulfilled his role always through intensive communication with
all these participating organizations. 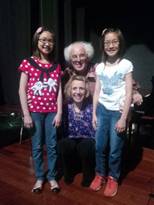 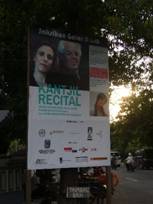 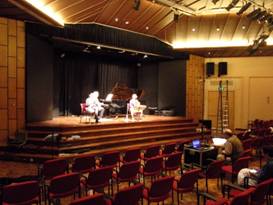 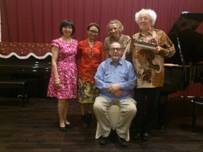 The following institutions have been supporting KANTJIL RECITAL PROJECT financially:

Without these organisations supporting
KANTJIL RECITAL PROJECT,
could not have been materialized.

Looking back at the “double-project” KANTJIL RECITALS & YICMF,
we are very happy to see how well all the cooperation has been worked out.
Until the day we present this report several messages has been exchanged
(e-mail/Facebook/Twitter), which even suggest a follow up.
It looks like the cooperation between SCN, YICMF, AMT and TRACE21 could well result
in such a follow up in the near future.
Vocal reports on this “double-project” showed a great enthusiasm and support.
The combination of concerts, educational program and chamber music festival
(offering lots of unknown repertoire) was received enthusiastically
by participants, audiences and fellow musicians and composers.
Specifically the Kantjil Story as performed during the recitals,
and the way the Educational Program was materialized
were praised highly with qualifications like “amazing”, “great”, ”well done”.
We all want to give special thanks to FPK, Culture & Development Fund
(Dutch Embassy/Jakarta) and Eduard van Beinum Foundation
for their firm financial support.
Without that support this “double-project” would not have been possible!
In terms of support, many thanks have to be delivered to a lot of local organizations like:
Erasmus Huis staff/Jakarta
WidyaMitra-IbuInge/Semarang
Int. Brain Aacademy staff/Semarang
CakDurasim & East-Jawa Arts Council – Pak Sukatno and staff/Surabaya
Pertemuan Musik Surabaya – Ibu Gema, Mas Respati, Ibu Nadia, Ibu Jeanne
ISI/Yogyakarta (a special cooperation of Sewon, Pascasarjana and Rectorat).
And to many individuals contributing to the success of this “double-project”.